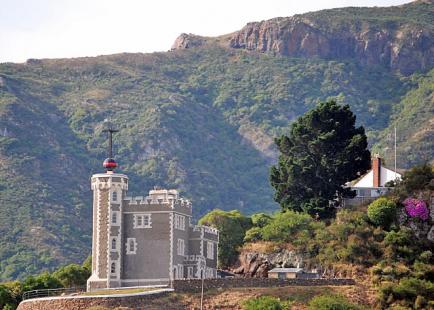 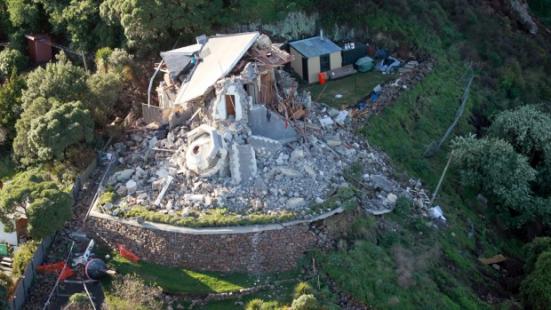 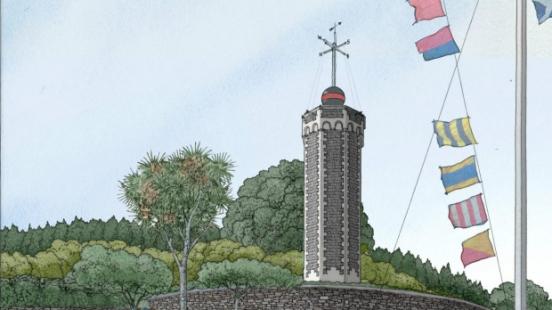 Visual signals were important features of any port, necessary for communication between ship and shore, in pre-radio times. The Timeball Station sustained devasting damage during the Canterbury earthquakes but the site remains significant to New Zealand’s history, and that of international maritime history.

Like a Scottish castle dominating the scenic port of Lyttelton, the Timeball Station was one of the few of its kind left in the world.

From 1876 to 1934 a ball dropped from its mast on its stone tower, signalling the time to ships in Lyttelton Harbour.  Visual time signals were important features of many of the world’s ports, being necessary to correct ships’ chronometers and ensure accurate navigation.  The timeball apparatus came from the well-known German firm Siemens Bros, and the astronomical clock from Edward Dent & Co. of London, who had made the Big Ben clock.

Use of the timeball was discontinued in 1934 when it was replaced by radio signals, though flag signals continued until 1941.  The flags, which predated the Timeball Station, were used on the flagstaff nearby to signal to ships and to communicate shipping advice to the town.

A fine example of Victorian technology, the Timeball Station was one of only five in the world known to be still in working order.  It was a rare piece of maritime history, fabulously restored and boasting spectacular views over Lyttelton Harbour.  Sadly, the building was significantly damaged in the Darfield Earthquake on 4 September 2010, and damaged beyond repair in the event of 22 February 2011.

Heritage New Zealand would like to restore parts of this fantastic historic and internationally significant maritime site. Rebuilding the Timeball Station tower will help return an important historic place to the people of Canterbury and to the nation. It will restore heritage to a place that has lost much of its past and be a symbol of hope for the future.

A full rebuild of the Timeball Station simply will not be possible, but with so much of the building’s fabric retrieved, recorded and stored, we will be able to rebuild the tower, and let the Timeball rise again. The plan to rebuild the Timeball is ambitious and unique – a heritage building like this has never been rebuilt in New Zealand. This exciting project is complex and will take longer than more typical restoration projects.

Join us on the journey…

You can now sign up for news, updates and information about the rebuild project by completing the signup form at bitly.com/timeball.

The Timeball Station Facebook page is another way to remain in touch with information about this place. You don’t have to be a Facebook member to see this page – just make it a favourite to check in and see what’s new.

A short animation that brings to life the concept of rebuilding the Lyttelton Timeball Station’s tower and mechanism on the original site using the original materials.